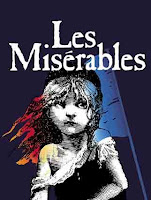 As May is my birthday month, and this year brings with it a particular milestone (30!), I decided that I would treat myself to as many shows as I could manage, and I could not imagine not managing to squeeze in at least one of the long-running musicals that form the bedrock of much of London’s theatreland. Having already seen Joseph twice this year, my thoughts turned to Les Misérables, and lastminute.com duly obliged with some half-price tickets. Les Mis is up there with Joseph in terms of having seen many, many productions, I think this was show number 11 for me, and yet I never tire of it.

Based on the Victor Hugo novel by Alain Boublil, and with music by Claude-Michael Schonberg, it follows the lives and loves of a group of characters on the fringes of society in revolutionary France, les misérables or the unfortunates. The number of characters may seem quite bewildering, but their stories incresingly intertwine, and the beauty of the play is that it deftly moves from the personal to the political and back again, thereby keeping the interest fresh and covering so many different aspects of human emotion as we flick from intimate love stories to revolutionaries preparing for battle to personal quests for revenge time and time again.

The musical is entirely set to music which may put some people off, but preconceptions really should be left at the door as this is a classy piece of work. The strength of the music, in particular the abundance of memorable tunes, really evokes the emotions of the all the characters, whether from the personal or the political point of view. Who, for instance, can fail to pity Eponine in On My Own; laugh out loud at the effrontery of the bickering Thénardiers in Master of the House, or be genuinely inspired by the patriotic ferv

our of ‘Do You Hear the People Sing?’ and ‘One Day More’. Among the performers, I liked Jon Robyns as Marius who I recognised from the original cast of Avenue Q, with Drew Sarich’s Javert and Nancy Sullivan’s Eponine also particularly impressive.

For the most part, sets are simple but no less effective for that, the one exception being the barricade scene; the barricade itself filling the stage, finally turning a full 360 degrees to reveal the terrible and shocking aftermath of the confrontation. At face value, Les Misérables might seem a dull and depressing subject for a musical, but the clever mix of humour, pathos, love and loyalty weaves a magical aura that stays with you long after the final curtain, and crucially for a musical, also leaves you humming the tunes.