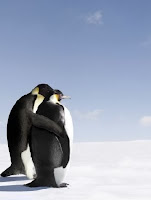 “We all get a bit down Stitch, that’s why there’s dance routines”

Me, As A Penguin is a slightly surreal but gently affectionate tale of the struggle of four twenty-somethings in the search for personal identity. Marking the professional full length debut of playwright Tom Wells in London, it takes up residence in the small Studio 2 at Dalston’s Arcola Theatre. Set in Hull, Liz is nine months pregnant and hosting Stitch, her shy gay brother who’s trying to escape life at home in a tiny village stuck working in a knitting shop, but he’s struggling a bit. He’s not connecting with Liz’s partner Mark and connecting too much with Mark’s predatory gay friend Dave. What follows is a stonkingly well-written tale of stolen penguins, experimental knitting and a whole lot of Battenberg cake.

It is fast-paced, contemporary and extremely funny, with hidden depths that ensure some real emotional investment, a most promising debut play indeed. Where it is particularly strong, and in a most pleasing way for me, is in its depiction of its two gay characters. Without resorting to employing beautiful young men to wander around shirtless, something several gay plays in London are currently guilty of, Wells has crafted two wildly different yet ultimately convincing and recognisable young men. Ian Bonar is simply outstanding as the ever-tongue-tied, painfully shy Stitch, struggling to make the transition to the (relatively) metropolitan gay lifestyle offered by Hull and deal with the emotions provoked by finally embracing his homosexuality. And with the penguin-suited (don’t ask!) Dave, we have as realistic and uncompromising a gay character as I’ve seen recently: arrogant, unashamedly horny, Daniel Abelson invests the right level of self-assuredness that tramples over all around him to great effect.

Samantha Power and John Catterall also do well as Liz and Mark, young expectant parents with a sparky relationship that is not as solid as perhaps it might be and full of gloriously witty repartee. Power in particular is superb as the tenderly protective sister trying to manage with her brother’s reticence and the apprehension about Mark nagging away at her. And Catterall balances her well, with his mixture of affable blokeish awkwardness and a genuinely sweet nature, tempered with his fears about having to grow up into his impending role as father.

Wells has an excellent ear for capturing the comedy in the mundane, his dialogue is just excellent and packed full of one-liners and has the gift of being able to combine the humour with something more serious, threading the darker undercurrents throughout with skill. I look forward to seeing further work from him, perhaps taking on a slightly more daring structural format, but at just an hour long, Me, As A Penguin is well worth a punt and trip to East London.