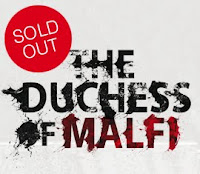 Much like 3D glasses at the cinema, whoever came up with the idea of close-fitting masks for Punchdrunk’s shows, clearly does not wear glasses. I had a devil of a time hooking them over the mask and into the elastic at the sides and making sure they were secure. It may seem like a little thing but when you’re spending three hours wandering round looking for things to watch, it becomes a little frustrating having to constantly ensure your glasses don’t fall off.

A collaboration between ENO and Punchdrunk, The Duchess of Malfi is an immersive production of John Webster’s story set to a new score by Torsten Rasch. Spread over three floors of a disused office complex in outer East London, it is a typical Punchdrunk production in that the audience is left to find their own story through their own experience as they wander unguided to find impromptu scenes taking place in all sorts of strange environments.

From other people’s reports, it seems that we struck quite lucky in managing to see maybe 8 separate scenes of singing, but how they related to each other I do not know, it was fiendishly difficult trying to make out the words that were being sung and even with the synopsis, you’d’ve had a job working it all out. It wasn’t even abundantly clear to us who the Duchess was until the final scene. Musically, it was very modern, Torsten Rasch’s score was harsh and too unforgiving in the snatches that I heard. Perhaps it would work better as a continuous piece, but in the way it is presented here, that is impossible. It was well sung, but with such limited engagement with the performers, it was hard to really form opinions about them. The dancers were largely good, my fellow theatre-goer spotted his former school colleague Conor Doyle, but again, with such short bursts of activity, there’s little to really comment on.

Scattered amongst all of this were flashes of ingenuity and beauty. The big dance scene on the ground floor was good but as everyone left, one dancer remained giving us a wonderful floorshow which then moved into a violent duet with another partygoer in a glass-fronted lift. And aspects of the design were highly effective, the trees with leaves of sheet-music, the sumptuously dressed boudoir, the mountain of tv screens. But all the corridors and staircases were left in their original state, so any sense of atmosphere that had been built up was lost the moment one made a transition. And I didn’t really like the confused amalgamation of styles throughout: the opening medical suite of rooms were clearly located in a timeframe of the recent past, but the major performers were all in period dress and by the point the Duchess was singing to CCTV footage of one of her kids, whilst one of the men wandered round stark naked, I’d given up trying to make sense of it.

Ironically, the best moment of the evening for us was completely opera free: we were stuck in a small room with a looped video playing of a horse being killed at an abattoir over and over again with two of the actor/dancers having a completely wordless but enthralling meeting which culminated in a genuinely menacing plunge into the dark. But moments like these were too few and far between and to celebrate the fact that we began to enjoy ourselves at the moment when we realised we didn’t care about missing the singing seems to be missing the point of going to an opera, no matter how it is set up.

The final scene when we were all ushered together into a cavernous room by some gong-banging did provide some jaw-dropping drama and an amazing final image, but in the end, it all felt a bit Emperor’s (or indeed Duchess’) new clothes: a whole lot of effort for frankly questionable reward.