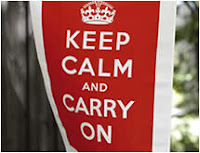 “I knew the English way was the only way, God help me. You make a bloody great speech – and then you have a stiff drink.”
Oh, To Be In England is a neat addition to the Finborough’s RediscoveriesUK programme as it is a world premiere of a 35 year old play by David Pinner which was adjudged to be unstageable due to its incendiary attacks on political extremism and its links to British pride. Set in Barnes and running through 1974 to 1975, it deals with life in a Britain still suffering from a post-imperial hangover, exacerbated by an economic downturn. In particular it looks at George, a man loses his job in the City but whose social conditioning as a middle-class white Englishman leaves him with nothing but a superiority complex and supremely ill-equipped for the realities of the struggle of life.
Darkly comic in tone, we see George divorced from everything that gave his life meaning and in his relations with his wife and son, the flirty neighbour and his German lodger, trace his retreat into a cocoon of rightwing thinking as his (already strong) xenophobia gets even worse, his politics swing further to the extreme as his economic situation fails to improve and his personal relationships stagnate and shatter. And at this level, as the story of a man, this play was surprisingly effective and engaging in portraying how easily extreme thinking can be fomented in times of hardship. It was less successful in drawing out the parallels with the wider political context due to the relentless verbosity and speechifying which Pinner saddles his characters. The dialogue often feels as if from a lecture, stilting the natural flow of things: instead of saying ‘there’s not many jobs out there’, someone says ‘we’re in an age where jobs are increasingly hard to come by’.
It was strongly acted throughout but there were some curious casting decisions which made the first scene a little more perplexing than it should have been. Charlotte Thornton looks far too close in age to Daniel Fraser to truly convince as mother and son, lending their horseplay a weirdly sexual dimension and with the arrival of Peter Broome’s rather camp George, the dynamics were all slightly off within this family. But it is testament to the quality of the acting that these obstacles were soon surmounted with Thornton impressing as Kay, finally fulfilling her potential as she’s able to stretch her artistic wings and Broome handling most of the extremely clunky dialogue rather well and doing a nice line in manic eyes and axe-wielding (though I wish he’d button his shirt up). Jonathan Christie was also good value for money as the Teutonic lodger Florian, a model example of how to deal with the past and move on successfully.
Alison Neighbour’s design seems to flow from the brown corduroy sofa that dominates the living room, most if not all costumes are stunning variations on brown polyester and floral prints and it all fits onto the set of The Potting Shed quite neatly, the action never leaving that one room. Mel Cook’s direction keeps things moving at a sprightly pace and does well to remind us that though this is a 35 year old play, so many of the lessons about the way in which society can fall apart during economic downturns and the allure of extremist thinking in times of hardship are alarmingly relevant even today.
Running time: 2 hours (with interval)
Programme cost: free cast list, playtext available for £9
Booking until 24th January, but book quickly as there’s only 4 more performances
Originally reviewed for The Public Reviews
Tweet
Share
Pin
Share