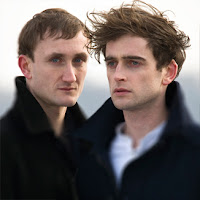 “Is it possible not to want anything”

It is a good time for fans of neglected Scandinavian playwrights who are popular on the continent. The Young Vic’s I Am The Wind by Norwegian Jon Fosse follows the Orange Tree’s venture into the work of the Swedish Lars Norén with Autumn and Winter, but this is a truly international venture as directing this show is celebrated opera, film and theatre director Patrice Chéreau, making his English language début in any venture.

Simon Stephens’ English version works from a literal translation Øystein Ulsberg Brager to create something subtle, something ambiguous as the playwright(s) probe questions of desire and existence on a beautifully moving journey for two men, named simply The One and The Other, as they venture from a protected cove into the open ocean and quite literally into the unknown.

Chéreau has brought with him his creative team, some of whom he has been working with for over 40 years, and with great success. Richard Peduzzi’s design creates a vast expanse of space, a beach with a pool of water in its centre, which breathtakingly converts into a boat tossed about on ocean waves as the men’s journey takes them in deeper waters. Dominique Bruguière’s lighting works effortlessly, flitting from the calming, rippling pond effects to the dark tempestuous storm-tossed moments and is complemented beautifully by Éric Neveux’s ever-present music, building an atmosphere of reflection which suits the piece perfectly.

Tom Brooke and Jack Laskey are both excellent: Brooke as The One with an otherworldly feel, it is his character whose journey is most at the centre here yet he remains enigmatic throughout. Laskey as The Other trying to find out what is motivating his companion and relaying the events on the high seas and does well to generate emotion in the face of such opaque responses as those that he gets. Working with artistic collaborator Thierry Thieû Niang to develop a physical language for the show, of deliberate, almost choreographed movement, has worked wonders and the relationship that they manage to bring to life is superbly done, given the relative lack of help from the writing.

On paper, this really is not my kind of theatre: recent shows such as Pinter’s Moonlight and Stephens’ own Wastwater which make a virtue of their elliptical obscurity have not gone down well with me and I have to say that I really do not enjoy Beckett’s plays at all. But for some reason, I Am The Wind connected with me in a way that I was not expecting. Others leaving the show sneered at its sub-Beckettian aspirations, but if one considers it to be Beckett-lite, then that might explain why I liked it as it is free of the heavy modernist baggage that comes with his work (as I see it) and consequently has a greater elemental freshness.

It clearly isn’t for everyone, but theatre affects people in different ways and for myriad different reasons and I hope I’ve managed to articulate a few of the ways in which this show, albeit most unexpectedly, captivated me for the full 65 minutes. Feel free to disagree but for me, this was a beautifully mounted production of a play that asks questions of you, and for once I was inclined to answer – indeed, with the utterance of Brooke’s last lines, a shiver ran through me and a tear came to my eye.

4 Replies to “Review: I Am The Wind, Young Vic”