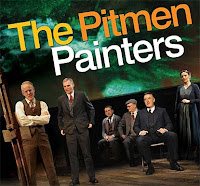 “And when I stopped to look at what I’d done, suddenly I realised it was light – it was morning – time for work … And I was shaking – literally shaking – cos for the first time in me life I’d really achieved something …”

I spent an inexplicably long time resisting The Pitmen Painters, even though several people had recommended it to me but I was insistent that I wouldn’t like it, mainly because I thought it seemed too worthy. But after its highly successful runs at the National Theatre, on Broadway and a recent UK tour, it has now taken up shop in the West End at the Duchess Theatre and I finally succumbed to the lure of a ticket. And as the cries of ‘I told you so’ ring in my ears, somewhat predictably I really enjoyed myself with this sparky piece of writing from Billy Elliot scribe Lee Hall.

More accurately, I fell totally in love with it at the interval, the first half having moved me to tears on more than one occasion and being about as well written as I think anything could. The play is based on the true-life story of a group of gruff Northumbrian miners whose interest in painting, initially stoked by a less-than-successful art appreciation class, leads them to start creating their own art which, unexpectedly, over the coming years becomes highly regarded by the establishment.

The play spoke to me on many levels: I’ve never really been one for art galleries myself, I don’t really ‘get’ paintings so the scene in which the group react to a piece of obtuse modern art was just perfection – one of the best scenes of theatre I think I’ve ever seen. Trevor Fox’s Oliver is outstanding here, beautifully articulating his response to something that stimulates, challenges and inspires him.

And in this way, it also connected to me as a theatre blogger. Despite what some people may think, I don’t consider myself part of any establishment, I still feel like a regular theatregoer – indeed I associated much more with the pitmen than with the professor or the patrons – and though the contrast between the day job and the passion might not be so pronounced in my case – it is several years since I was down t’pit back home up north – I feel, and hope, that there is an honesty and lack of pretension to my writing that is more akin to the simple but powerful art of the miners than the work of the more established artists.

The first half beautifully captures this argument that all culture is for everyone to engage with no matter on what level, the varied personal growth in the men who find a new way to express themselves and also in the bittersweet realisation of the opportunity that now presents itself to Oliver, mixed with a little resentment of how long he has had to wait for it. There’s a moving connection between Trevor Fox and Joy Brook’s wealthy patron which encapsulates all of these points, and neatly pointing out that in order to truly transcend, the art (or the writing…) needs to be exceptional as well.

Unfortunately the second half didn’t grab me quite so much, dragging its heels a little and not feeling quite as moving as the focus shifts from the discoveries that art had allowed these men to make to the realities of their situation once they had been accepted as artists. It loses a little of its emotional intensity and so slipped from a five star to a four star, but still remaining something remarkable. Design-wise, the way the art is displayed on screens for all to see is ingenious and Max Roberts’s production is cleverly done, expert at never letting us forget how powerful shared cultural experience is – in some of the best ensemble work currently onstage anywhere – and the value of cultural education and expression to people of all classes.