“I shall do thee mischief in the wood”

It’s taken me a while to get around to the Globe this year – their Tempest was fine but not particularly inspired and so my enthusiasm for booking for Macbeth and A Midsummer Night’s Dream waned. But the thought of missing Michelle Terry was not one I was prepared to countenance and taking a chance on an Indian summer, I booked for a random Friday matinée for the latter, hoping that the rain would hold off. Fortunately it did and with perhaps my lower expectations, I was entirely dazzled by Dominic Dromgoole’s production of what is one of my favourite of Shakespeare’s plays, which cast the newly opened Michael Grandage adaptation firmly in the shade.

Pleasingly, especially for someone who knows the play quite well, the production abounds in new textures and fresh insight into characters, relationships and events. I loved the early establishment of the former relationship between Joshua Silver’s Demetrius and Sarah MacRae’s Helena and their definite lingering attraction – I’ve never heard the beginning of “ohhh spite” loaded with such meaning – which makes their conclusion much more dramatically satisfying. Puck as a posh stroppy teenager is an inspired choice with Matthew Tennyson’s angular presence; the way in which Pearce Quigley’s Bottom has to be coaxed into accepting Titania’s advances makes perfect sense; the Rude Mechanicals’ play being unrehearsed chaos is entirely appropriate and of course, downright hilarious. 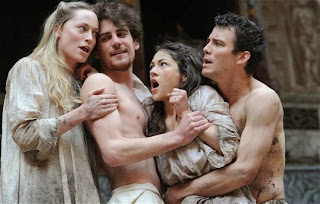 When the workmen are first revealed to be camp northerners, my heart sank a little as the broader brushstrokes of Globe comedy haven’t always been my favourite things, but there is something remarkable about how Dromgoole makes it work. Quigley’s take on Nick Bottom is quite different, a downplayed, almost melancholy soul, dripping with acid contempt but with a warm crinkling of the eyes keeping it from being too vicious. Having them be a clog-dancing ensemble provides obvious entertainment but also subtly reinforces the bond between them, and their enactment of Pyramus and Thisbe is unadulterated pleasure, a riot of physical comedy, visual gags and the joy of performance, particularly in Christopher Logan’s Flute eventually blooming as Thisbe.

There’s real joy too in seeing Michelle Terry flourishing into the ranks of our premier actors. From the opening masque where Athenian battles Amazon, we see this is a reluctant enforced partnership between Theseus and Hippolyta and she never lets him forget it – Hippolyta too easily fades away in that opening scene but Terry ensures she is a vibrant force in the ducal chamber and throughout, keeps John Light’s Theseus on his toes with constant reminders that she may allow herself to become his equal but never his subservient partner. 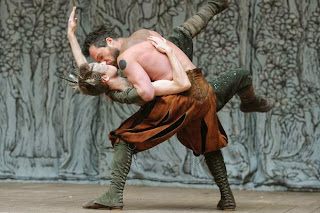 This vitality is carried forth into fairy land too where the same actors take on the warring Titania and Oberon, Light really coming into his own here with a hugely physical performance, swinging on ropes and climbing columns, and it is apt that his (rough) magic is fearsomely shouted rather than delicately incanted. His fervour comes from a place of burning jealousy and intense love, as we see bitter recrimination writ all over his face as he sees what he has reduced his fairy queen to, so I wasn’t a hundred percent sure what to make of the homoerotic overtones of his relationship with Puck, delightful as it was.

And all this work has the knock-on effect of evening out the play so that the lovers’ quarrel no longer forms the focal point but instead is just one of any number of interesting and hilarious sequences. Working with such an uncut version of the text makes it less out-and-out funny than it often played these days and this brings an almost haunting depth to some of the viciousness of the insults, even as we’re still laughing at the last cutting jibe. Luke Thompson and Joshua Silver emerge the victors with their duelling Lysander and Demetrius, Thompson particularly amusing with his physicality; Olivia Ross and Sarah MacRae are strong but never quite hit the same level for me – this is one area where Grandage might just have the edge.

Though this was as long a Dream as one could imagine, and with a punishingly late (although appropriately placed) interval, it was also one of the funniest I have ever seen. There are times, usually when the season is announced, when I ask myself do I really need to see another [insert Shakespeare play of your choice] done ‘traditionally’ and so the Globe never quite makes it onto my must-see venue list. But though we may not get the raucous reinventions of the Bard there that are proving my adaptations of choice at the moment, this venue just proved that it can still surprise with a version of a familiar classic which feels as fresh and new, yet still full of integrity, as anything Propeller or Cheek By Jowl might produce. Highly recommended.