Ever behind the curve, I present 10 of my top moments in a theatre over the last ten years (plus a few bonus extra ones because whittling down this list was hard, and it will probably be different tomorrow anyway!)

The establishment of the Public Acts programme at the National Theatre offered up something sensational in Pericles, an initiative designed to connect grassroot community organisations with major theatres, resulting in a production that swept over 200 non-professional performers onto the stage of the Olivier to create something that moved me more than 99% of professional productions.  A truly joyous and momentous occasion.

Honourable mention: this year’s musical take on As You Like It proved just as heart-swellingly beautiful over at the Queen’s Theatre Hornchurch. END_OF_DOCUMENT_TOKEN_TO_BE_REPLACED

“If music be the food of love, play on…”

I was absolutely blown away by the Watermill’s production of A Midsummer Night’s Dream back in May, and so the news that their similarly actor-muso Twelfth Night from last year would be being revived at Wilton’s Music Hall was most welcome. And if it doesn’t quite live up to the magic of that first time for me, it is still a most enchanting and unmistakably bold take on the play

Paul Hart’s production relocates Illyria to the 1920s, jazz is flourishing, prohibition is rife and the shadows of WWI haven’t quite yet dissipated. Katie Lias’ design concentrates the action in the Elephant Jazz Club and the historic atmosphere of Wilton’s proves perfect for this treatment. And without giving too much away, the dipping down into the audience is done brilliantly.  END_OF_DOCUMENT_TOKEN_TO_BE_REPLACED

“The wolves are running, Kay Harker”

There’s a wonderfully rough magic to Justin Audibert’s production of The Box of Delights that makes it the perfect choice for Wilton’s Music Hall’s festive show. And it is one that will have extra resonance for those of a generation similar to my own, whose childhood TV watching centred on a VHS copy of the 1984 TV adaptation, whose use of graphics and green screen hasn’t necessarily aged all that well (see around 14.30)…

The nods to the occasional naffness of that design (a car that turns into an aeroplane!) were much appreciated but such is the warmth and wit of the theatrical invention here, that it is hard not to be won over by Piers Torday’s adaptation of John Masefield’s 1935 fantasy novel whether you’re familiar with it or not. And though it flirts with the odd sinister undertone, the abiding feel is one of adventurous derring-do and festive cheer, fit for whatever family you have around you.

Set in the depths of Christmas 1938, we’re in the world of plum puddings and hot possets, where schoolboy Kay Harker finds his journey home from boarding school disrupted by falling into the middle of a battle between two mighty magicians. Given the precious Box of Delights by one of them, he’s charged with protecting it – and by extension, the very future of Christmas itself – but little can prepare him for the magical power that is contained within. END_OF_DOCUMENT_TOKEN_TO_BE_REPLACED

“If they choose to, the company may dump any man”

The historic walls of Wilton’s Music Hall – the last surviving grand music hall in the world – may be old but they are far from old-fashioned. After their major refurb, the shift into becoming a producing venue has seen them adopt a varied multi-disciplinary programme of comedy and music as well as theatre (look out for the Tobacco Factory’s highly-rated Othello coming soon).

Sadly, their current revival of How to Succeed in Business Without Really Trying – the first major one in this country since its 1963 premiere – falls on the side of the fatally old-fashioned. Director Benji Sperring’s sure touch has seen him work wonders with shows like The Toxic Avenger but here, an inconsistency of tone and performance level means that it sits awkwardly on this august stage. END_OF_DOCUMENT_TOKEN_TO_BE_REPLACED

“We’re going to have to tell the vicar”

The 2017 London Jam is a festival of improvisation presented by The Showstoppers, in association with Extempore Theatre & Something for the Weekend, featuring a wide range of improv stars from across both the UK and the world – the improvised Ibsen troupe from Norway being the unlikeliest inclusion there. Naturally, we went along to see our beloved Austentatious and as ever, they did not disappoint.

Regaling us with the tale of Fear and Fascination, full of illicit hat-wearing, malevolent vicars with a predilection for flashbacks, and sheep-loving surprises, this was the team at their best, taking their time with a slow start to to tease out some utterly surreal story strands. The bit of audience participation was unexpected good fun, but it was the surprise murder and the group’s stunned reaction and subsequent glee that made it one of the best unknown Jane Austen novels I’ve yet seen.

“Do you feel the kind of grace inside the breeze?”

One of the joys of having this blog is the aide memoire aspect of it, the theatrical diary that it has become, allowing me to trace how my tastes have shifted. I say this in particular reference to Floyd Collins, a show I didn’t much enjoy the first time I saw it at its 2012 production at the Southwark Playhouse and yet which on this revisit, four years later, I adored.

A substantial part of it comes with the musical complexity of Adam Guettel’s score, one I (still) think few people would fall in love with instantly, but also one which has repaid repeated listens and the breadth of performers yearning to sing his music (Audra McDonald, Kelli O’Hara…), incrementally convincing me of its worth and culminating in the gloriously revelatory sound of Tom Brady’s band tucked away in the balcony of Wilton’s Music Hall. END_OF_DOCUMENT_TOKEN_TO_BE_REPLACED

It’s a real shame that Springtime for Henry (and Barbara) only ran for three performances over two nights as I’d’ve recommended it to all and sundry, not least for capturing the spirit of exactly what Wilton’s Music Hall should be used for. A highly idiosyncratic piece, described as “a fictitious lost musical reconstructed in fragments”, it’s the continuation of a multi-phase project by artist Mel Brimfield and musician Gwyneth Herbert, interrogating the relationship between sculptors Henry Moore and Barbara Hepworth.

This it does imaginatively in a number of ways: a mockumentary format (calling to mind nothing so much as the genius behind-the-scenes episode of Acorn Antiques) detailing decades of attempts to put this show on the stage, complete with abortive scores from Sondheim and Lloyd-Webber and a high cast turnover; repurposed archive footage; a chat show section interviewing the ‘director’; and an impressively wide-ranging set of musical numbers, referencing a equally wide set of influences. The cumulative effect was very much of a variety show and that just felt perfect in the atmospheric surroundings of this oldest surviving music hall in the world. END_OF_DOCUMENT_TOKEN_TO_BE_REPLACED

“I know what you’re thinking, you’ve seen it all before…”

Much like we all carry our own sense of humour with us, we all too have our own individual fears and dreads. Which means we don’t all find the same things funny (I barely laughed in One Man, Two Guvnors for example) and, as Hallowe’en fast approaches, it makes it difficult to guarantee that something is scary for everyone. A proliferation of shows across London are all determined to send shivers down our spine, but none can have been so initially successful as Theatre of the Damned’s The Horror! The Horror! which sold out its run at Wilton’s Music Hall before it had even started.

As the main hall is being renovated, this Victorian-era promenade show takes place in the shadowy spaces and ramshackle rooms upstairs at Wilton’s and takes the form of a sneak preview of the new season of work from A.S. Brownlow & Company, a group of performers whose acts have all taken something of a gruesome turn. From saucy singers provoking mysterious men to vengeful magicians bitterly resisting the arrival of the future, a cabaret of the grisly and ghastly emerges from the ghosts of the past. And there are puppies. Oh, the puppies. END_OF_DOCUMENT_TOKEN_TO_BE_REPLACED 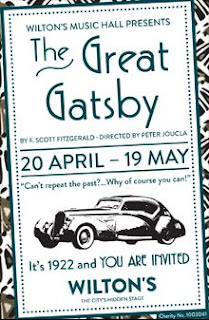 “’Whenever you feel like criticising anyone,’ he told me, ‘just remember that all the people in this world haven’t had the advantages that you’ve had’.”

Fans of The Great Gatsby are being spoilt for choice this year as the passing of the rights of F Scott Fitzgerald’s novel into the public domain has led to a number of adaptations hitting the London stage. First up is an immersive adaptation at Wilton’s Music Hall (the 8 hour extravaganza Gatz arrives in June and a musical version plays at the King’s Head in August) and it’s proved to be a canny move as the entire run has sold out before it even opened, apparent testimony to the popularity of the book but I hope there is a swell of affection for Wilton’s at play too as they continue to raise funds for their vitally important reconstruction works.

The palpably atmospheric history of the building lends itself to theatrical exploitation and Peter Joucla’s production makes the most of this from the off. Characters mill about the bar and foyer area and play out little scenes which locate us firmly in prohibition-era New York and escort us into the main theatre which has been bedecked simply but effectively in a sweeping, vaguely Art-Deco inspired design by Lucy Wilkinson. A barbershop chorus starts singing jazz tunes of the era and we’re off in this tale of the enigmatic Gatsby, whose hard-worn pursuit of the woman he loves is slowly poisoned by the decadence of the society around them both. NB This was the final preview performance. Oh, and I haven’t read the book. Yet. END_OF_DOCUMENT_TOKEN_TO_BE_REPLACED

Timberlake Wertenbaker’s new translation of Racine’s Britannicus updates the action to the modern day even though the story remains centred on a day in the life of Roman Emperor Nero. His power-hungry mother Agrippina manipulated things so that the succession passed to her favourite son Nero rather than rightful heir Britannicus after the death of Emperor Claudius, but her lust for power has passed down the bloodline. Rome shudders as Nero establishes himself politically, leaving Agrippina feeling increasingly marginalised, made worse by setting his gaze on his brother’s lover Junia.

Wilton’s Music Hall is such an atmospheric and idiosyncratic venue that I always want productions there to utilise it to its best potential so I have to admit to being a little disappointed by Chloe Lamford’s design which feels too modern and out of place. But Irina Brown’s direction makes inventive use of the space and also does make sense of the updating, Siân Thomas’ Agrippina channelling Thatcher vibes throughout as a woman battling in a male-dominated arena and the political intrigue that dominates everyone’s life whether they want it or not is immediately recognisable, no-one knows who to trust in this world of slippery political double-speak. END_OF_DOCUMENT_TOKEN_TO_BE_REPLACED