“It is nothing to do with the wine

Or the music that’s flooding my mind”

Shona White is a rather under-rated (for my money at least) Scottish actress and singer perhaps most famous for stints in Mamma Mia which were 12 years apart, but whose musical theatre credits stretch far and wide. Her 2011 album I’ll Bring You A Song, produced by Richard Beadle reflects the breadth of her career and it is this variety which is both its strength and its slight weakness.
I have to admit to finding it hard to get too excited about tracks like ‘To Sir With Love’ and Tell Me On A Sunday’s ‘Take That Look Off Your Face’. They’re sung perfectly competently but familiarity breeds a certain measure of contempt. Where this type of song choice succeeds is where the interpretation dares to be different, the sharp emotion of Chess‘ ‘Nobody’s Side’ a case in point here, so too the slowed down take on ‘As Long As You’re Mine’ from Wicked with the ever-melodious Daniel Boys.

END_OF_DOCUMENT_TOKEN_TO_BE_REPLACED

“He was in a right state, well he’s a lightweight”
Dougal Irvine was recently in town with The Buskers Opera at the Park but the first of his shows that I saw was Departure Lounge, back in 2010 at the Waterloo East Theatre. A rowdy tale of four British teenaged lads delayed in Malaga Airport’s departure lounge, reflecting on the past week’s drunken shenanigans, the quartet come to realise that their trip has actually been a real rites of passage job, in more ways than one.
Scored for acoustic guitars yet still managing to pull in a wide range of musical influences, Irvine’s music stands up to the test of time pretty well. He clearly knows his way around a hummable melody with a raft of catchy choruses and with his four strong singers in Chris Fountain, Jack Shalloo, Liam Tamne and Steven Webb, takes full advantage of the close harmonies that simultaneously master and mock boyband clichés.
Listening to the recording though, it’s interesting that a couple of key pieces of plot aren’t contained here in the music, referenced to slightly but dramatically absent in the main. Which isn’t a problem per se in the flow of the album especially for those who haven’t seen the show – you don’t miss what you don’t know after all. But it does mean that there’s a certain lack of heft to the music, when such key revelations are left in the book.
That said, the mixture of Britpop, flamenco, a bit of Country & Western, barbershop quartets, beatboxing and some serious power-ballading has the special allure of a Duty-Free Toblerone 3 for the price of 2 offer with all the nougaty promise inherent in such a purchase. A nice holiday treat.

John Gay’s The Beggar’s Opera has already inspired one musical adaptation – Brecht and Weill’s The Threepenny Opera, a new production thereof opening later this month at the National – and finds another in Dougal Irvine’s The Buskers Opera, receiving its world premiere here at the Park Theatre. And if its timing might be slightly off in that regard, it couldn’t be more bang on the money on the London mayoral election day, featuring as it does, corrupt politicians and ruthless media magnates seeking to advance their agenda on an unsuspecting populace.

Set in the strange potential-filled moment that was the 2012 Olympics, Jeremiah Peachum is said mogul with Mayor Lockitt in his pocket, determined to milk it for all it is worth – the only thing standing in their way is half-social justice warrior, half-street busker Macheath, strutting at the head of protest group The Ninety-Nine Percenters. That said, getting one over the fat cats isn’t always as satisfying as getting one’s leg over and as he plays off his wife Polly against the mayor’s daughter Lucy and a few more besides, a thrill-seeking society is encouraged to make judgement. END_OF_DOCUMENT_TOKEN_TO_BE_REPLACED

Not quite a musical, more a play with songs; and not quite a play, more free verse. The Southwark Playhouse’s Teddy may defy simple categorisation but it is easy to say that it is one of the more adventurous shows opening in London this week and consequently one of the more exciting. Not only that, get to the theatre 15 minutes early and there’s a pre-show gig from in-house band Johnny Valentine and The Broken Hearts – it’s all kicking off down the Elephant and Castle.

Tristan Bernays’ tale ducks and dives through the Saturday night experiences of Teddy and Josie, teenagers in a 1950s London still bearing the scars of a decade before but one in which an exciting, if dangerous, new scene is emerging. Coming out of a time of real austerity – 14 years on rations – the subculture of Teddy boys and girls spoke of rebellion, liberation and the determination to shake up the social order, all soundtracked by the newly revolutionary music of rock’n’roll. END_OF_DOCUMENT_TOKEN_TO_BE_REPLACED

“If you’re feeling low low, get down to Madame JoJo’s”

Featuring the vocal talents of Michael Cantwell, James Gillan, Niamh Perry and Claire Moore, and showcasing the work of musical theatre writers both established but primarily up and coming, A Song Cycle for Soho marks yet another feather in the cap for Mercury Musical Development, Simon Greiff and their sterling support for the genre. MMD has long been an invaluable resource for British musical theatre writers and Simon Greiff through SimG Productions has been tireless in his promotion of younger names and so there is something very apt about their collaboration here.

A Song Cycle for Soho developed out of Andrew Brinded’s original book which cast a bit of a sideways glance at Soho, an area of central London that is teeming with debauchery,history, character and a whole lot more besides. 16 set of songwriters were then invited to compose works that captured the multitudinous quirkiness of life in Soho and the result is a collection of songs that cover history, both recent and long ago, and the modern day; comedy, quiet tragedy and the whole gamut of crazy emotions inbetween. END_OF_DOCUMENT_TOKEN_TO_BE_REPLACED 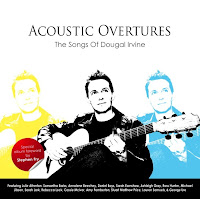 “Nothing’s simple at all”

Acoustic Overtures is the debut album from writer/composer Dougal Irvine, one of the group of up-and-coming musical theatre composers with address books full of West End stars that we’re blessed with at the moment, featuring a selection of his songs recorded by a bunch of familiar faces. Irvine’s show Departure Lounge played at the Waterloo East theatre last year, but this CD wisely steers clear thereof (the soundtrack for that show has already been released anyway) and focuses on new material, including new shows which have been developed through the Perfect Pitch development scheme.

Irvine came to musical theatre from a rather circuitous route and resultantly comes across as a breath of fresh air, Departure Lounge was accompanied by just two guitars but it doesn’t feel at all like a gimmick but the organic development of this sound. These songs have been more fully orchestrated but there’s still a raw freshness to the voice coming through in most of the songs. I have to say I was a little disappointed with the way the album opens with two jaunty cabaret-type numbers, it’s not that they are bad but rather they don’t feel representative of the musical theatre compositions that make up the bulk of the recording. Ashleigh Gray’s ‘Two Faces’ and Daniel Boys and Cassie McIvor come together well on ‘Silence in the Rain’. END_OF_DOCUMENT_TOKEN_TO_BE_REPLACED

The Battersea Barge has seen quite a few cabarets over the summer but the producers behind the latest – Summer with the Composers – have taken things a step further and offered a live-streaming service of the show, completely free of charge, with which it could be enjoyed from the comfort of your own home. I’m not technologically minded enough to know whether it was my laptop being slow or the recording itself that wasn’t the clearest quality, but it feels churlish to complain that it wasn’t crystal clear considering it was all free and in any case, the sound quality was excellent.

The evening was focused on four leading lights of new British musical theatre writing: Grant Olding, Dougal Irvine, Laurence Mark Wythe and Tim Sutton and showcasing their work in a variety of ways from shows that have made it onto the stage, shows that are still in development, some which never made it out of the rehearsal room and a few one-offs, including one written especially for the Dress Circle Benefit gig a couple of weeks ago. Special guests Samantha Barks, Annalene Beechey, George Ure and Stephen Ashfield sang a selection of the songs but the composers themselves also had a go at singing each other’s songs. END_OF_DOCUMENT_TOKEN_TO_BE_REPLACED 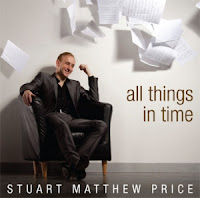 “Am I wishing for too much?”

Stuart Matthew Price, currently to be found in the ensemble of Shrek The Musical, has long carried the (potentially) dubious honour of being named one of the brightest upcoming stars of British musical theatre since wowing people in Parade at the Donmar Warehouse in 2007 and since then has been quietly carving out an interesting career, more often than not choosing to highlight lesser-known musical theatre writing. And so too does he do here on his debut album, All Things in Time featuring a selection of the cream of new musical theatre writing, including himself as he is a composer as well as performer.

Dougal Irvine’s beautifully relaxed ‘The Touch of Love’ was a surprising highlight for me: I’d usually plump for piano arrangements every time but Irvine’s light touch (ba-dum) works wonders here to make this a great track. And followed by Laurence Mark Wythe’s Goodnight Kiss, the album really does come off as a fabulous showcase for interesting writing: both of these songs standing up excellently individually, but also suggesting interesting musicals that might accompany them. Likewise, Stiles & Drewe’s ‘Wishing For The Normal’, a characterful duet with Caissie Levy, and Grant Olding’s ‘Midnight Will Happen Without Us’ are other great signs of the health of new British musical writing. END_OF_DOCUMENT_TOKEN_TO_BE_REPLACED

Departure Lounge is a new musical by Dougal Irvine at the Waterloo East Theatre, a new theatre in the already hugely crowded Waterloo area, but it feels like a nice new space. A converted railway arch, the auditorium is a long, relatively narrow room and has the feel of the Old Vic Tunnels working space but with less damp and cold and slightly more comfortable seats. It is a show that has been long in gestation: Perfect Pitch Showcase winner in 2006, it has been workshopped under the name Unzipped!, it has had runs at the Edinburgh Festival and also in New York before arriving here at Waterloo East.

Four eighteen-year-old boys are stuck in Malaga airport after a post-A-levels but pre-results blowout holiday on the Costa del Sol, and whilst killing time they reminisce about the drink-fuelled antics of their week or at least they try to as it seems that they can’t agree on everything. Most of the confusions centres around the character of Sophie, with whom they have all had some kind of contact and through a flashback from each boy, they start to piece together what really happened and secrets start to tumble out in the airport. END_OF_DOCUMENT_TOKEN_TO_BE_REPLACED