“I’ve seen many things, my friend. But you’re right. Nothing’s quite as wonderful as the things you see”

So as David Tennant’s Ten regenerates into Matt Smith’s Eleven, Doctor Who also changed showrunner/lead writer/executive producer/oddjob man as Steven Moffat took over the reins from Russell T Davies. The pressure was on both to deliver – the relatively unknown Smith had low expectations, Moffat had sky-high ones due to his much-garlanded writing – and I don’t think you can argue that they didn’t. Smith revealed an impossibly ancient soul to his youthful frame with a Doctor unafraid to be as angrily dark as hyper-actively quirky. And Moffat constructed a complex series, introducing the depths of new companion Amy Pond slowly, and building to a multi-stranded timey-wimey finale that makes the head hurt just to think about it.

Elsewhere, the overused Daleks returned in multicoloured format, the Weeping Angels were much more successfully reprised in a stonking double-header, the Silurians also came back, and Arthur Darvill’s Rory grew in stature to become an effective second companion as opposed to a third wheel. Oh, and Helen McCrory stole the show, but then you knew I’d say that didn’t you 😉 END_OF_DOCUMENT_TOKEN_TO_BE_REPLACED

Taking place in an East London which is changing face, due in part to the arrival of the 2012 Olympics Games, 1936 is a well-timed production, running at the Arcola Theatre for most of April. Bookended by scenes set in the Berlin Olympic Stadium in 1948, the play is narrated by real-life journalist William Shirer as we cover events from 1931-1935 leading up to the Berlin Olympics in 1936 as the news about the burgeoning anti-Semitism under the Nazi regime began to spread throughout the world, forcing the American sporting community to make a stand against what they saw as a betrayal of the Olympic ideal.

Following threads both in Hitler’s regime as figures such as Leni Riefenstahl and Joseph Goebbels tried to persuade the Fuhrer that the Games were an opportunity to promote Nazi Germany to the world, and in the US sporting administration as more principled people argued for a boycott in the face of bureaucratic resistance. Counterpointing these discussions are the experiences of two athletes, Gretel Bergmann a German Jewish high jumper and Jesse Owens the black American sprinter. END_OF_DOCUMENT_TOKEN_TO_BE_REPLACED

After having one of the hottest tickets in London in January with The Rivals, the Southwark Playhouse had quite an act to follow and it has done so by reviving Brendan Behan’s play The Hostage, the first new production in the UK for 16 years. Opening with a song and dance routine as The Rivals did not really help to stop comparisons instantly being made, we soon moved onto to both a naked man appearing and characters addressing the audience, both of which have been in incredibly plentiful supply this year already.

Behan’s play is incredibly hard to define: it’s set in a brothel in 1960s Dublin where a young British soldier is being kept hostage by the IRA in reprisal for the planned execution of a young IRA member in a Belfast jail. The hostage is forced to share the space with the resident prostitutes both male and female, their customers, and a random selection of crazy individuals, but finds a connection despite everything with a young innocent housekeeper. It’s comic but tragic, it’s farcical but political: as I said, hard to define! END_OF_DOCUMENT_TOKEN_TO_BE_REPLACED 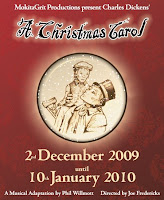 “Is there no festive spirit in that businessman’s heart of yours?”

Of all the various productions of A Christmas Carol that can be found dotted around London this winter, I doubt any are as well suited to their venue as MokitaGrit’s production at the King’s Head Theatre on Islington’s Upper Street. There’s something old-fashioned about this cosy theatre pub and it suits this Victorian, gothic-inflected version of Charles Dickens’ famous story down to the ground.

Opening with, and then continually narrated by Dickens himself (played by a genial Nigel Lister), trying to convince a publisher and a pub full of locals that he has a story worth telling, a cast of 16 effortlessly sing, play and dance their way through this familiar tale with such inventiveness and vibrancy that you could not feel more festive by the end if you tried. Using

every inch of available space, the cast flow around the full scope of the stage and even up and down the aisles with such ease and confidence, bringing the audience with them right into the heart of the action. I loved the arrival of the chain-dragging spirits, though its probably not for the faint of heart, and there was some clever use of puppetry and props throughout which kept the dynamic energy going. END_OF_DOCUMENT_TOKEN_TO_BE_REPLACED

I have long struggled with Chekhov, I’ve never really seen the attraction or seen a production that made me understand why he is so well regarded as a dramatist. So when the Donmar Warehouse announced a hugely star-studded season of plays to be performed in the West End, at the Wyndhams Theatre, my heart sank a little bit to see that the first play was Ivanov, by none other than Anton Chekhov. But in a new version by Tom Stoppard, directed by Michael Grandage and featuring the return to the London stage of Kenneth Branagh, this emerged as a production that might actually have convinced me that people are onto something here!

The key to my enjoyment here was all about the humour that is threaded throughout the evening so that the dour tragedy that is something of a trademark is leavened with something else and introduces a wider palette of emotion so that the ‘tragedy’ becomes well, more tragic for being contrasted with something else on offer. So Ivanov, seeking escape from his TB-ridden wife whom he no longer loves, rocks up at the neighbours’ house on a regular basis despite owing them money and a daughter there who has designs on him. When discovered together, society turns it disapproving eye on him but it turns out there’s a far harsher critic in Ivanov himself. END_OF_DOCUMENT_TOKEN_TO_BE_REPLACED