“The sage shall play the knave tonight,
The maid shall misbehave tonight”

Howard Goodall’s fruitful relationship with the National Youth Music Theatre has long been a mutually beneficial one and it was they who premiered The Kissing-Dance, his musical adaptation of Oliver Goldsmith’s She Stoops To Conquer back in 1998. What is truly remarkable is just who happened to be in that year-group – Sheridan Smith, Gina Beck, Simon Thomas, Alex Hassell, Michael Jibson…the list goes on. And 10 years on, they gathered once again to record Howard Goodall’s score.

The show received its professional premiere at the Jermyn Street Theatre in 2011 and in a neat twist, saw Gina Beck reprise the very same role of the headstrong Kate Hardcastle and Ian Virgo also return to the cast but graduating from scallywag Tony Lumpkin to impecunious but irresistible Charles Marlow. And having that familiarity with the score meant it was a delight to go back and delve into its melodic wonderment once again. It is recognisably Goodall to be sure but with a distinct pastoral bent to it which has a pleasingly differentiating effect. END_OF_DOCUMENT_TOKEN_TO_BE_REPLACED 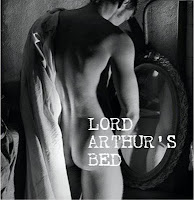 “Being in drag is just a bit of harmless fun”

Perhaps catering to its audience a little too much, Lord Arthur’s Bed arrives at the King’s Head theatre pub promising “nudity and scenes of gay sex”. Given the intimate space one might expect a few of the beige mac brigade showing up, but there is much more to this play than titillation, indeed there’s only one point where these two facets actually coincide very briefly.

Newly civil-partnered Donald and Jim discover that their apartment has an extraordinary history, and decide to re-enact this story for us. It was previously inhabited by Lord Arthur Clinton and his wife Stella back in 1868: all was not was it seemed though as when Stella and her friend Fanny were arrested at the theatre, they were revealed to actually be Ernest Boulton and Frederick Park, they were both cross-dressers. A scandalous trial then ensued which shocked the nation, yet it has not achieved the same infamy as Oscar Wilde’s similar legal exploits which happened 25 years later. Set against this tale, is the relationship of Donald and Jim themselves, and we flick between the two narratives throughout the action. END_OF_DOCUMENT_TOKEN_TO_BE_REPLACED