Skip to content
Whereas the aim of the blog has always been to take a semi-serious look at theatrical productions up and down the country, when it comes down to it, I can be extremely shallow and get easily distracted by pretty faces and fit bodies. And so too, it seems, do my readers as my Leading Man of the Year post last year has consistently been one of the most viewed posts on here!! So without further delay, I present to you my top ten of 2010: some familiar faces, some less well-known and some unexpected crushes, but all of whom set my little heart a-flutter at some point this year. 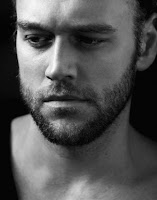 Last year’s number one and he has done absolutely nothing wrong this year to deserve losing that position. Indeed in creating one of the sexiest Macbeth’s we’ve had for quite some time, I imagine he’ll have won some new ardent admirers. And following that up with a nifty turn in An Ideal Husband and perversely keeping his clothes on in a role more than he has done for a couple of years, he continues to be one of the most appealing actors on the British stage (and he can really act too, not just a pretty face/body and comes across as a top bloke on the old Twitter)
2. Sam Swainsbury

You’ve got to love a hard worker and Swainsbury appeared in no less than 4 shows this year, but it was the first one, The Rivals at the Southwark Playhouse, where he really came to my attention. Some flirty wideboy banter at the top of the show made me pay attention and then during the show, at a crucial moment in the show, he came into the audience to hide and sat on my lap for a few minutes, a not altogether unpleasant experience! As a cheeky chappie-type in A Day at the Racists, he continued to appeal and though he had lost a little of his allure in Hay Fever, his efforts in Propeller’s Richard III reaffirmed his attraction to me.

3. Matthew MacFadyen
Ever since his turn as Tom in Spooks, Matthew MacFadyen has been a popular choice in this household, and being paired with Kim Cattrall in Private Lives allowed for him a more acerbically funny role than I’ve seen him in before. Also he got to wear silk pyjamas which was nice. (Incidentally, Matthew MacFadyen’s hairy chest is my 18th most popular search term of the year!)
4. Charlie Cox
Probably the only redeeming feature of the Donmar Warehouse’s The Prince of Homoburg (copyright @3rdspearcarrier) was Charlie Cox’s fine self and I am not too proud to say that I spent most of the show trying to get a good view of his nipples down his loose fitting shirt. When a show is as dull as that one was, you gotta find your own way to get through it…
5. Andrew Scott

A funny one for me as Mr Scott isn’t someone I find hugely attractive generally speaking, but something happens when he gets on stage that makes him irresistible. It happened in Cock last year and in Design for Living this year where his scene with Tom Burke at the end of Act II was one of the achingly sexiest things onstage this year. Again, there were silk pyjamas involved, but this isn’t a prerequisite for me, honest!
6. Oliver Chris 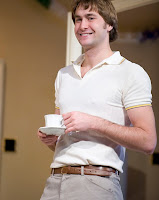 The highlight of Season’s Greetings for me, indeed one of the only things that got me through me, and strangely reminiscent of Simon Groom from Blue Peter, evidently unearthing something of a boyhood crush I didn’t even know I had, but this Act I outfit looked amazing on him and it was no wonder Catherine Tate’s character had difficulty controlling herself… Plus he is Rachael Stirling’s other half, which makes me love him even more.
7. James Graham

One of the unexpected pleasures of the year was James Graham’s The Man at the Finborough. I didn’t have the flexibility to see Samuel Barnett in the show and so I ended up seeing the playwright himself performing the one man show, and I swear by the end of it, I would have done anything that he asked! Unafraid to show a hugely endearing vulnerability and a clear talent for writing plays, he’s the type of man you’d be quite happy to take home to your mother.
8. Sam Crane 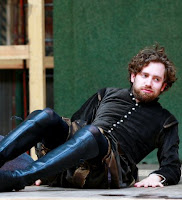 An unexpected pleasure who popped up several times this season at the Globe, was Jake Gyllenhaal look-alike Sam Crane. Whether as the charismatic but doomed Hotspur or the buccaneering Pistol in the Henry IV plays or the foppish Lawrence in Bedlam, he has something of the stage magnetism that makes me think we will be seeing a lot more of this guy in years to come.
9. Chris Fountain

Chris Fountain: the boy from Hollyoaks is all growed up now. And as demonstrated in Departure Lounge as would-be alpha male JB, he has a nice pair of pipes on him too
10. Ciaran McConville

Obviously so much of this list is subjective and this one is most definitely a case of you had to be there to get it, but if you did go to see Beyond the Pale at the Southwark Playhouse then you cannot have failed to have been bewitched by Ciaran McConville. From the moment he started talking to me in the bar (part of the show, rather than my magnetic personality) he had me sold on the whole interactive promenade shebang despite it being fricking freezing under those arches.
Honourable mentions:

Kevin Guthrie in the National Theatre of Scotland’s Peter Pan, though it is probably illegal and possibly immoral to fancy Peter Pan
Nigel Lindsay in his lovely riding boots in Broken Glass
Daniel Boys: I mean just look at the picture!
Thanks to everyone who helped me out one way or another with finding pictures. This has all been done for a bit of light-hearted festive fun, but if there are issues with any of the photos I’ve used, then please do contact me.